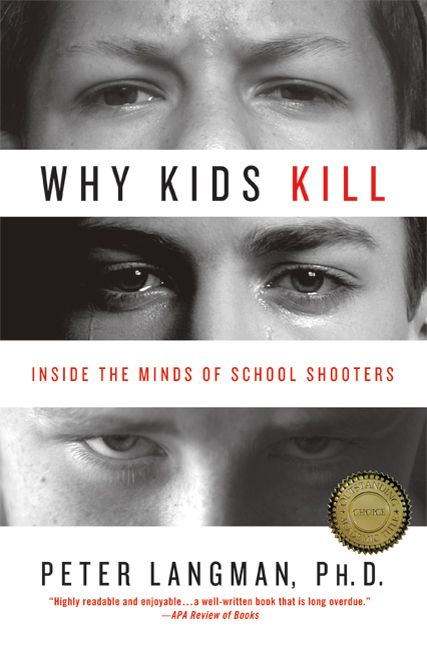 Why Kids Kill: Inside the Minds of School Shooters

In the horrific aftermath of school shootings, we all struggle to make sense of seemingly senseless acts. Despite massive media coverage, little light has been shed on school shootings. We call the perpetrators “monsters” or point our fingers at bullying or media violence. Why Kids Kill: Inside the Minds of School Shooters goes beyond derogatory labels and simplistic explanations, providing a comprehensive psychological analysis of school shooters. Bucking the trend of looking at school shooters as a homogeneous group, Dr. Langman’s groundbreaking work demonstrates that there are three distinct categories of school shooters. His insightful exploration identifies multiple factors that converge to turn kids into killers.

Why Kids Kill: Inside the Minds of School Shooters classifies ten school shooters within a three-part typology: psychopathic, psychotic, or traumatized. The ten shooters are Evan Ramsey, Michael Carneal, Andrew Golden, Mitchell Johnson, Andrew Wurst, Kip Kinkel, Eric Harris, Dylan Klebold, Jeffrey Weise, and Seung Hui Cho. The book also presents five adolescents who were hospitalized and evaluated by Dr. Langman because they were at risk for committing rampage school shootings. The five potential shooters are compared to the ten actual shooters and placed within the typology. The book ends with a chapter addressing the prevention of school shootings and the early identification of potential shooters.

Why Kids Kill was named an Outstanding Academic Title of 2009 by the American Library Association.

Find in a library

Praise for Why Kids Kill